– a guide to foalings

Firstly I want to make clear that this guideis written by me on the basis of the experience I myself have made me as breeder. I am neither  “expert” nor veterinarian, and the information is only meant as an aid to those who are missing advice!

As a manufacturer of SAFEMATE foalalarms and breeder I am often asked about these things, and now I have written down the answers, as I usually advise people.

Attach the foal alarm to the mare in time, like 14 days before the calculated date of foaling. Follow the alarm instructions and keep an eye on if it is set correctly.

Foaling box must be clean (but not sterile, ie washed walls, cleaned around the water cup and crib), large (min. 4x4m) and located in a calm environment. If there is other horses nearby, the mare should know them. The mare should use the box for several weeks prior to foaling, so that her immune system is set to the environment. It is important to maintain dry, fresh bedding in the box, and regular mucking out.

The typical signs of an imminent foaling are well-known; softening (subsidence) of the area around the base of the tail, possibly “wax” on the teats, tense udder (in some cases with races of milk), and swollen, flaccid vaginal opening. How clearly these signs are can vary greatly from mare to mare. I some cases there are no signs.

It must be calm around the mare in the time up to foaling. Looking to her very often, may stress her up. The mare can choose the time of foaling herself, and she will wait until there is quiet around her.

When the actual foaling is about to begin, and the foalalarm sounds, quitly go to the stable and look carefully to the mare. The mare will react strongly to noise so be still, but talk soothingly to her so that she will not be frightened – avoid she stops foaling again (she can revert the process up to the point where the sack shows). Keep an eye on how the mare is located in the box, there should be room for her to stretch the legs, and enough space behind her to pull the foal out. Move the mare if necessary, but be careful not to get caught if she suddenly throws herself!

When the sack appears, or the front legs of the foal can be glimpsed, it is time to check out the foatal position. Wash hands and arms before, and then puncture the sack. The correct position for the foal is “back to back”, that means the foal has its back upwards in relation to the mare (as if standing), with both front legs stretched out and head and neck also stretched forward (toward the vaginal opening). The foal is born forward, so that first comes forelegs, then the head, body and finally back legs stretched backwards. If the foal is wrong positioned, then contact the vet immediately, who might guide over the phone, it requires swift action to correct position!

Can you only see one front leg, try to find the other and pull it forward. Protect the mare by holding around the foal’s hoof with your hand. The head should appear around the middle of the pipes, if it can not be found, the head and neck are bent backward. Call your vet and try to find and pull the head forward, it can be corrected by rapid intervention – when the foal is pressed further out by the contractions, there’s is no room. In rare cases, the foal is lying on the back or reverse, these are serious complications, with the risk of losing both foal and mare. By complications, you should keep an eye on the umbilical cord, if it is pinched or twisted etc., since the foal gets the oxygen through it.

If the foal is positioned correctly, it is time to help the mare a bit. Pull with feeling and in step with the mare’s contractions in both legs, but so that they are shifted 10-15 cm in relation to each other, this is done to reduce the “width” of the shoulder of the foal (it is the largest part of the foal) . Pull gently the foal out, this must be done obliquely downward, ie diagonally relative to the mare, if she was standing. Pull untill only the hind legs are inside the mare, it goes easily as soon as the foal’s shoulders have come out, and then wait.

The foal should breathe normally by now, if necessary remov the sack around the muzzle, open if necessary, the mouth. Wait up to 5 minutes. As long as the foal’s hind leg is still in the mare she will normally lye still, which is a great advantage because the foal receives important substances (and oxygen) through the umbilical cord, while having the possibility of its own breathing to stabilize.

At this stage, the mare would start calling the foal with some deep, short throat sounds – very characteristic. It is at this point that the foal is “imprinted”, ie is related to the mother. Be careful not to speak a lot to the foal who may be confused, and possibly imprinted too much on human beings.

After a few minutes, the mare gets up, or the foal will attempt it, thereby getting completely out.

Let the umbilical cord burst by itself, it must happen in a calm haul, then it will close by itself. If the umbilical cord is ripped or cut over, the foal will bleed to death, if so, stop the bleeding with your fingers, and pull the remains of the umbilical cord / belly skin out to an end that can be tied up with a cotton thread – contact if necessary your vet. This will often happen if the mare foals standing up.

Has the foaling been hard for the mare (normally the case for first-timers), it may be a good idea to move the foal to front of the mare, and possibly help it to dry the foal. However, it is important that the mare lick the foal, since this ritual strengthen the mare’s instincts, gives a signal to the afterbirth going out, and is further linking mare and foal together. The mare will perhaps bite into the foal’s hooves, this is normal, and happens to get the foal to stand. But keep an eye on this behaviour, my own mare Saga used to exaggerate this to a point where the foal couldn’t sleep.

When the mare and foal has good contact, and everything seems to be okay, you should leave them alone for a while – for example one hour. Thereafter, the foal hopefully gets up by itself and drink, otherwise you have to help it. It is very important that the foal gets the so-called rawmilk/colostrum from the mare within a few hours (3 – 4), as the foal’s intestine later will “shut out” the important immune substances in the milk. The foal is born without immune systems. 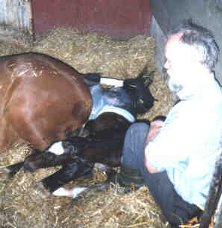 Check out the afterbirth, it must come within 6 hours, and be whole – ie take the form of a pair of trousers where one leg is slightly longer than the other. Some mares have colic symptoms when the afterbirth is coming out. If the mare rolls / throws herself, move the foal out in a corner of the box. If necessary, walk with the mare, but, mark my words; the mare can react very strongly to separation from the foal! Is there a problem, contact your veterinarian, who can give contraction-aiding medicine. Some mares will eat some of the afterbirth, this is normal.

The foal should be vaccinated against foal disease and tetanus within 24 hours. Furthermore, one must – especially for colts – keep an eye on the intenstine wax, that is dark, tough feces, located in the bowels of the foal from birth. When the foal has not had any feces within the first 12 hours, call veterinarian, who will provide a remedy for constipation. The end of the umbilical cord should be lubricated plenty of ie Formo Cibazol, this protects against infection and prevents flies in to keep the wound open (a summer problem). You can also use iodine, and then dust with penicillin powder.