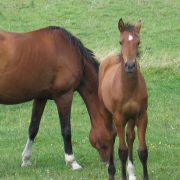 Our mare Saga Boesgaard had a difficult start in life herself, when she almost 4 months old lost her mother Sifka Boesgaard due to serious colic. Saga would not take the milk substitute, and only just managed the switch to normal feeding.

Although Saga herself was a quite insignificant mare and definitely had her faults, she was one of our best broodmares. Sportingly she had success under eventing rider Kim Løwe and besides that, she bred a number of good sport horses, and she is also the mother of the silver medal mare Visna Boesgaard.

One year we had not succes with putting Saga in foal, we then decided to switch stallion, and in early August, she was mated. Because it was too late to run her again anyways, I failed to scan her. When the time came to hand examination, she was just found to be in foal.

The usual 11 months and a few days passed, and one night my foal alarm awakened me. Everything looked fine until the front legs of the foal was showing a bit – from then it went very slowly. I of course helped Saga, and she pressed well enough, but it seemed to be a big foal. With the head and shoulders a bit longer forward, you could tell that something was wrong. A powerful membrane with obvious veins appeared beside the foal, and I was afraid that I was about to pull the uterus (womb) out of Saga! The veterinarian was called and he was there very quickly.

We were able to observe that this visible membrane was linked to the foal’s hind legs, and concluded that there was a twin within the exceptionally strong sack. The twin foals lay with their legs toward each other -sort of entangled. We had to pull them out, using quite some force, and they came almost simultaneously. The front foal was alive, but the last one was almost dead. You could see the heart beating, but there was no breathing. The vet examined primary reflexes by touching an eye – but absolutely no reaction. Unfortunately, this foal was brain dead, and a few minutes later the heart stopped beating.

Both foals were thin and small, and seemed a little stunted, but the front foal was as mentioned living. Most important of all though, was that Saga was okay – she had to have some stiching, but there was no internal bleeding and she was fresh in spite of the harsh treatment.

The living foal (it was never given a name) was bottle feed a few days, but never got off the ground. As it gradually gained strength, we examined it more closely, and it unfortunately proved to be paralyzed in one hind leg, and had to be put down. I could feel that Saga from the very beginning thought that it was’nt worth caring much for – she did not use much energy on it and it turned out well that she was right.

Despite the sad end of the twin foals, I am very glad that thanks to the foal alarm we were there in good time for this foaling. I have no doubt that our efforts saved the life of Saga, and she since had many fine foals. However – I would advise that you always scan for twins!