SAFEMATE Foaling alarm – Ready to use, with 2 year warranty!

SAFEMATE(R) foaling alarm consists of a receiver and a harness with a transmitter that sends a radio signal from the mare and thus activates an alarm – typically about 20 minutes before the actual birth of the foal.

SAFEMATE foaling alarm
This is how it works

It is always exciting when the time of the foaling approaches or is imminent. But unfortunately, there is also a risk that the birth of the foal is not without problems and can thus be a potentially great loss – financially as well as emotionally. Therefore, a foalling alarm is a good investment.

The robust leather harness with transmitter should be placed on the mare in good time, preferably 14 days before the calculated birth date. The foaling alarm should be adjusted to fit the mare as shown in the video guide or in the operating instructions.
Usually the mare foals at night (according to statistics 96%), when it is quiet and calm around her. Before birth, the muscles in the mare’s rear part will quiver and make small contractions, like a warm-up for the upcoming birth, and this makes the mare sweat.
The SAFEMATE foaling system measures the level of the mare’s sweat every 10 seconds, and sends an alarm signal when it analyzes that the sweat secretion increases. The receiver is activated via radio signal and will then alert you with light and sound signal. And if you have purchased our Caller Unit, you will also receive a call or an alarm text message.
If the foal is wrongly positioned, the mare will instinctively try to change this by rolling. SAFEMATE foaling alarm off course allows this natural behavior and does no harm to the rolling mare.
If you ensure that you are on the spot at the right moment, you can help the foal out of the sack, ensure that the mare and the foal are well after birth, and if necessary call the veterinarian. It is also important to ensure that the foal drinks the colostrum (raw milk) within the first 3-4 hours.

IMPORTANT – see also the section Advice for a good start. 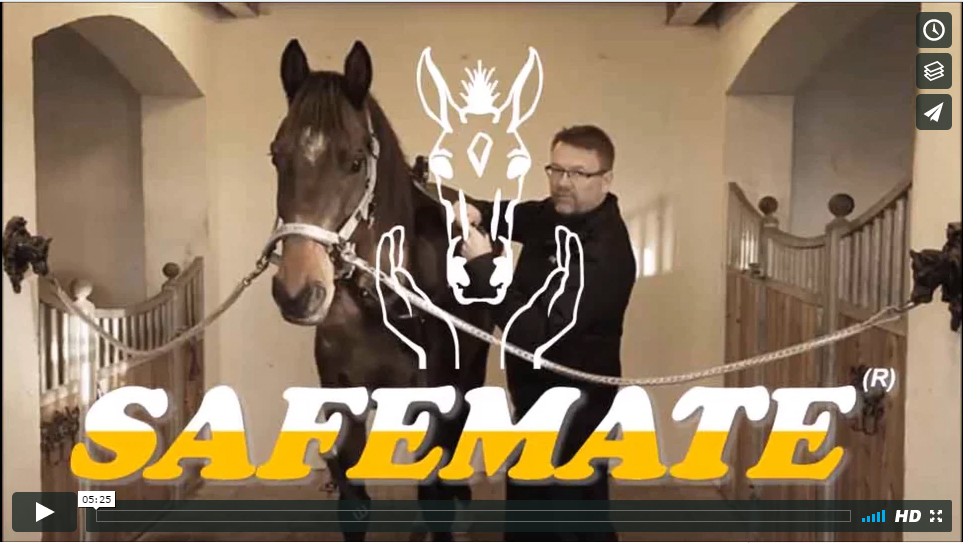 “At “Stud Tophøj” we have bred Danish Warmblood dressage horses the past 10 years. Among others Rockson, winner of the DRF 4year-Championship 2015 and Tebaldo, Dressage Colt of the Year, also in 2015.
Throughout the years, we have been using the birthing alarm “SafeMate”. The foal alarm is easy to operate, and it has worked flawlessly at every foaling we’ve had. “SafeMate” makes the foalings safe.
We can highly recommend to all breeders to use “SafeMate” foal alarm.” “Hello Mr. Boesgaard,
We are very enthusiastic about the Safemate foalalarm.
We bought it from you in the Holstein Halls in 2005, because an elderly couple, who owned the device, had recommended it to us. The birthing alarm has always worked well on different mares and rarely triggered false alarms, due to the adjustable sensitivity. A big advantage is that the alarm is triggered when the mare starts to sweat. Then there is about 1 hour until birth. Thus, the veterinarian can be informed in good time if he is to accompany by the birth. In addition, you can observe the mare and intervene if something is wrong.
We can recommend the Safemate foalalarm with a good feeling!” “In all the time I was director of first Bregnerødgård and later at York Stud farm (6 years from 1995 to 2001), I have used safemate foaling alarms. Also later on in my own breeding have safemate foalalarm been an reliable part. It has in the course of time become 200+ foalings, and safemate has not failed one single time. However, I have had to admit that my first alarm, 20 years old, had to be replaced this year; but fortunately the new model is both stronger and has more features. We have already received first foal this year, of course assisted by safemate, and next foal is expected during the next 10 days. Thank you Bjørn (Boesgaard) for an unmatched product.”

”At Blue Hors Breeding Station we have used Safemate foalalarms since 2001. We are very satisfied with the alarm and the service provided by Safemate. It is only natural for Blue Hors to test what is in the market of birth alarms, and it is our experience that the Danish foal alarm the best and most reliable alarm available. I can highly recommend Safemate.”

Blue Hors is the largest breeding station in Denmark, and one of the leading breeding stations in Europe and worldwide. The living legend Blue Hors Don Schufro is an example of success as well in sport as in breeding. 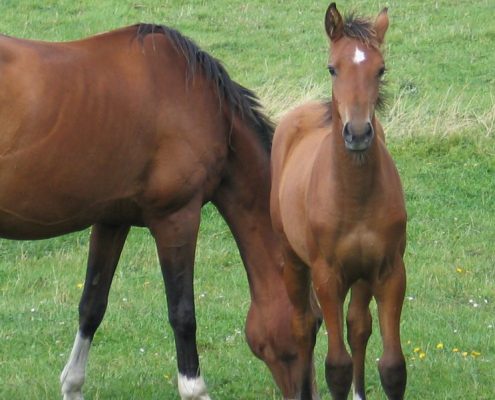 “It is Safemates goal to provide the best foaling alarm in the market, at a fair price, and continuously develop solutions to ensure that breeders throughout the world have the best possible conditions for receiving healthy foals. We want to dominate the European market, and be known globally as the strongest brand in the market.”

About us – Who is behind SAFEMATE(R) Foaling alarm

We are breeders ourselves. In 1982, after several years with ponies and riding horses, Arne Boesgaard, my late father , bought the mare “Heidi II”, who was graded DH – the main book . Although she was bought to ride, we started to use the Holsteiner stallion Flamingo, a winner stallion in 1976, who has given size and foundation to the Danish Warmblood.

This led to several horses as well as a passion for breeding. One of the horses was Frigg Boesgaard, a truly amazing mare. Frigg gave us 14 foals, and she set up two lines for us – dressage and jumping. Both Heidi II and Frigg became DV Elite mares.

The dressage line gave several sport horses with success to PsG classes, especially with the stallion Schwadroneur, but also Blue Hors Don Schufro was used. After the sad loss of Disa Boesgaard because of a broken leg, this line ended.

The jumping line almost came to an end when the mare Sifka Boesgaard (Royal Z I / Flamingo) had severe colic at the age of 4 years and passed away. Fortunately, she had a filly Saga Boesgaard (Corlando (now Corland)) by her side, but she was only 4 months old. Saga had a hard time, but she stayed with us for 21 years. She was my “personal” horse. Saga had a few years with the really great 3-day event rider Kim Löve, who participated in some international events and many MA showjumping events with Saga. A tendon injury meant an end to eventing, but later on, I started to jump Saga.

Beside all this, Saga gave us seven beautiful foals, of which we still have four. The well-known Casir Ask is the father of 2, Camarque of another mare, and then there is Visna Boesgaard (Willemoes) who was graded with a silver medal SRDH.